This weird hack will unlock your high-performance superpowers 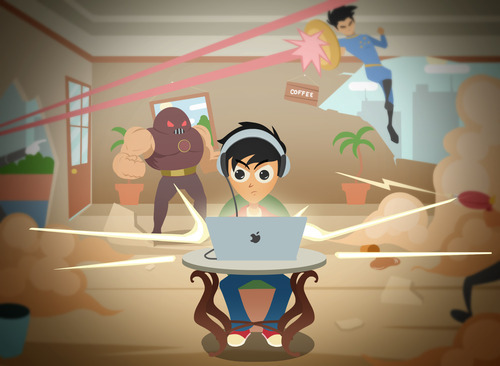 I am a writer. On my best days, I sit down at my computer and the words come easily. I feel powerful, competent and inspired. If I were an athlete you’d say that I was “in the zone.”

Psychologist Mihaly Csikszentmihalyi coined the term “flow,” to describe this state: “being completely involved in an activity for its own sake. Time flies. Every action, movement, and thought follows inevitably from the previous one.” We are most productive when we flow.

For most of us, flow is a rare and random experience. The ancient greeks used a religious metaphor—nine goddesses called muses who bestowed creative power on mortals as they saw fit—to capture the fickle and fleeting nature of flow.

But the truth is that some people achieve flow more often than others and they do so by optimizing the conditions under which they work—ambient noise level, tools, processes, caffeine intake—to fit their particular needs.

There is no one size fits all solution, but most people benefit from a consistent daily routine, which frees the mind from petty concerns and allows them to focus. The old cliche is true: the most important element of a daily routine is having one.

In The Psychology of Writing, the cognitive psychologist compares the writing habits of literary luminaries like James Joyce and Virginia Woolf. Some wrote in the morning, some wrote at night. Standing up or sitting down, in the country or the city. But they all required long periods of time without interruption to produce great writing. He concludes that lack of interruption may be the single most important ingredient in achieving creative flow.

Keep this in mind while finding your own routine. But remember that “interruption” is different for different people—the clatter of coffee mugs and cash registers drives me crazy, but it may put you at ease.

Find out what works best for you and stick to it. The flow will come.

// Michael Kalenderian, @ItsMikeKay, is a writer and editor based in Brooklyn

Houzz will help you rebuild your house

This Is Why Meetings Are Bad for Creative People

The Single Best Way to Improve Your Emails

Use this page when the boss walks by

Collaboration at its Finest: How Trey Parker and Matt Stone Dominate Television, Film and Stage

Here’s Why Going Back to School Isn’t Worth It

The Secret to Woody Allen’s Productivity

The Neuroscience of #Longreads and Skimming

Small driblets are no time at all.

A Third of the Internet Runs Their Software, and Here Is Their Secret

Please help Knote grow by sharing with your friends.